The sulphide heap leaching metallurgical test program commenced in May 2021 with a sample that had already been crushed to ½” and stored in Denver for several years. 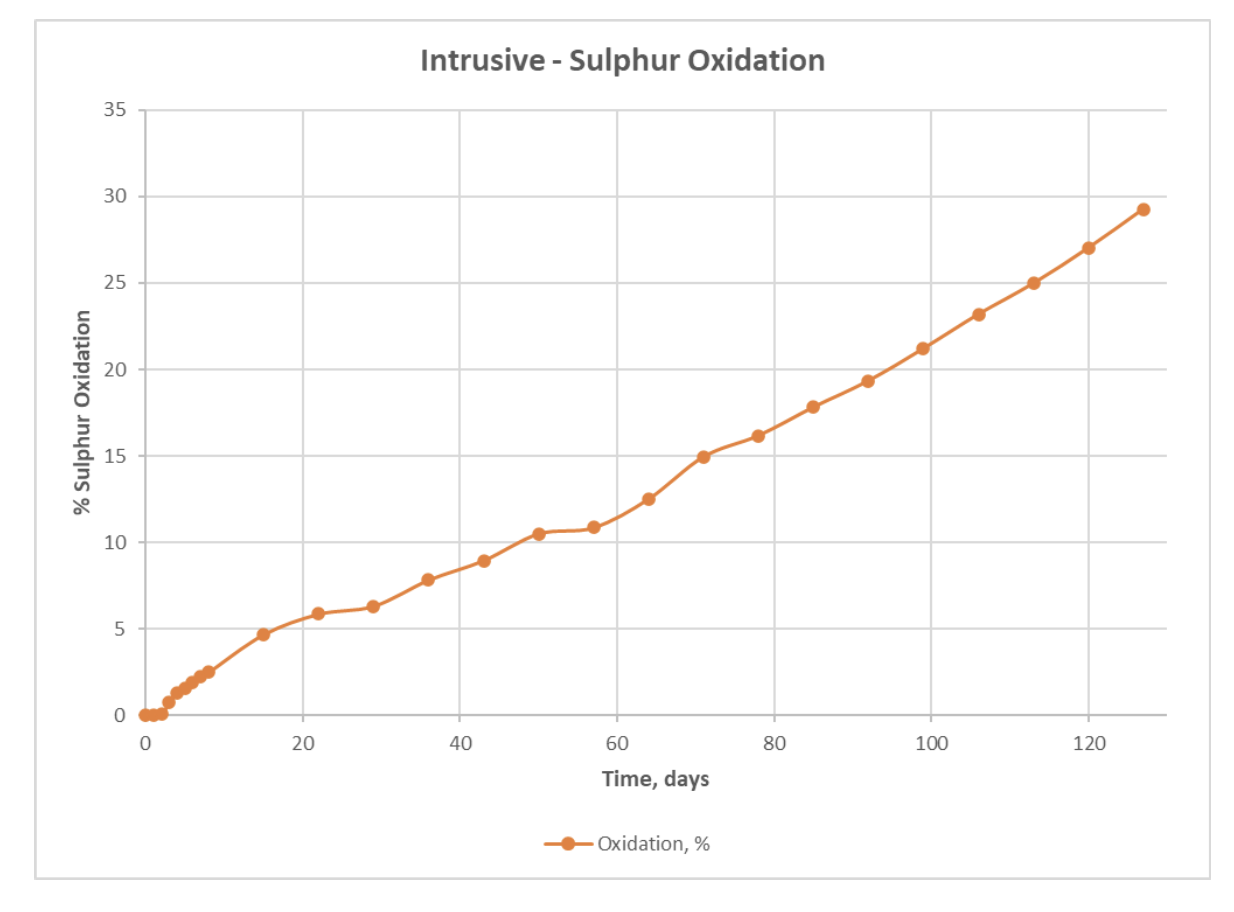 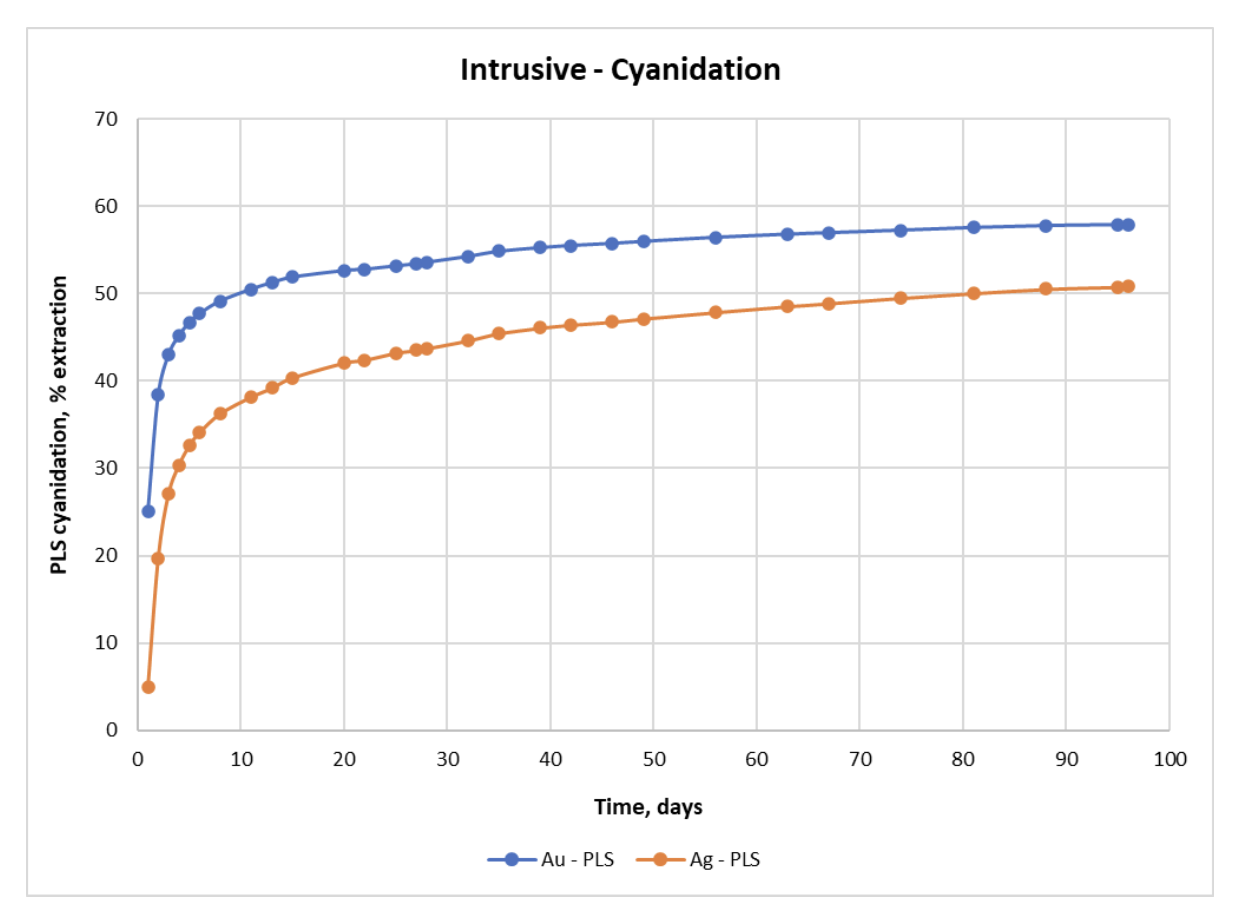 The above graph shows that over the 90-day leach period, the gold recovery reached almost 60% and silver recovery just over 50%. These results are extremely encouraging as they show significantly higher precious metal recoveries than unoxidized samples from previous test work used to support the 2013 and 2016 prefeasibility studies (PFS).

The oxidation rate, however, when compared to the first sample tested was slower and did not reach a similar oxidation level.

Alan Pangbourne, President and CEO, commented “the metallurgical results to date confirm that the fresh core samples being tested from Metates will oxidize in a similar fashion to the first column. We are now focusing on optimizing the oxidation rate and achieving sufficient oxidation to achieve the targeted gold and silver recoveries.”

A second round of testing is underway and is designed to investigating ways to speed up the oxidation kinetics and have multiple columns running under various conditions to improve and optimize the oxidation rate.

Despite the slower oxidation rate of the fresh core samples, Chesapeake remains optimistic that we will be able to optimize and accelerate the oxidation to achieve the desired recoveries.

Over the time since we started the drilling early 2021, we have observed that the Metates mineralization will oxidize naturally when exposed to air and moisture. 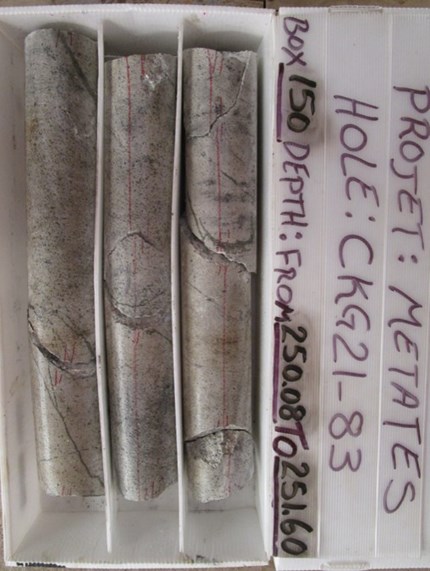 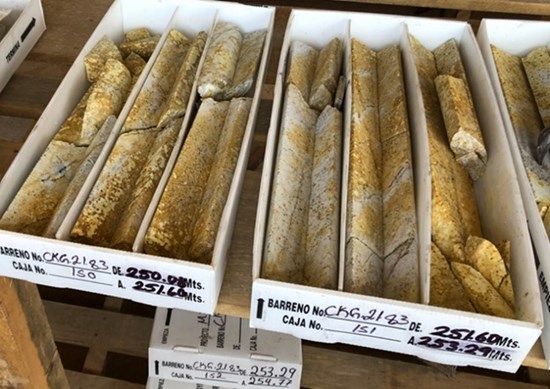 The above photographs pertain to the same drill hole and were taken over a period of 5 to 6 months. The first (grey) photo above was taken as the core came out of the drill barrel. The second photo was taken in November 2021. The change in colour of the core is an indication of natural oxidation. 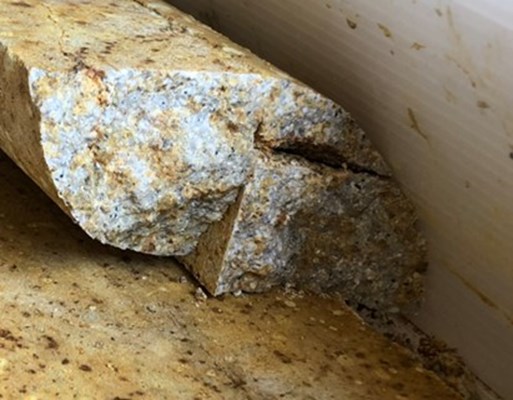 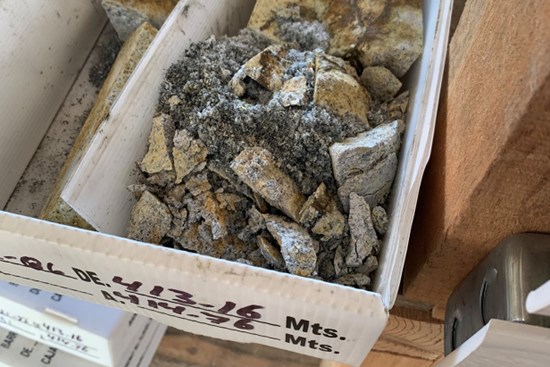 Figure 4 Other core after 5 to 6 months

The core was broken in November and clearly shows that the oxidation is also penetrating the sample. Additionally, parts of the core have visibly decomposed, as can be seen above in the second photo. A sample of this decomposed material was taken for X ray defection analysis (XRD).

The Company had originally planned to commence a PFS in 2022. Results of the Phase 2 metallurgical program and an updated mineral resource estimate will form the basis of a new PFS.

Chesapeake also has an organic pipeline of satellite exploration properties strategically located near Metates. In addition, the Company owns 69% of Gunpoint Exploration Ltd. which owns the Talapoosa gold project in Nevada.

Dr. Art Ibrado, P.E., of Fort Lowell Consulting PLLC, is the independent qualified person responsible for the scientific and metallurgical technical information in this news release in accordance with NI 43-101 and has reviewed and approved the contents of this release.

This news release contains “forward-looking statements” within the meaning of Canadian securities legislation. These include, without limitation, statements with respect to the updated MRE, economic and project parameters presented in the PEA and other costs and economic information, the strategic plans, timing and expectations for the Company’s exploration and drilling programs at the Metates Property, including metallurgical testing, mineralization estimates and grades for drill intercepts, permitting for various work, and optimizing and updating the Company’s resource model and preparing a pre-feasibility study; information with respect to high grade areas and size of veins projected from underground sampling results and drilling results; and the accessibility of future mining at the Metates Property. Such forward-looking statements or information are based on a number of assumptions, which may prove to be incorrect. Assumptions have been made regarding, among other things: the reliability of mineralization estimates, the conditions in general economic and financial markets; the price of gold and silver; availability and costs of mining equipment and skilled labour; timing and amount of expenditures related to drilling programs; and effects of regulation by governmental agencies. The actual results could differ materially from those anticipated in these forward-looking statements as a result of risk factors including: the timing and content of work programs; results of exploration activities; the interpretation of drilling results and other geological data; receipt, maintenance and security of permits and mineral property titles; environmental and other regulatory risks; project cost overruns or unanticipated costs and expenses; and general market and industry conditions. Forward-looking statements are based on the expectations and opinions of the Company’s management on the date the statements are made. The assumptions used in the preparation of such statements, although considered reasonable at the time of preparation, may prove to be imprecise and, as such, readers are cautioned not to place undue reliance on these forward-looking statements, which speak only as of the date the statements were made. The Company undertakes no obligation to update or revise any forward-looking statements included in this news release if these beliefs, estimates and opinions or other circumstances should change, except as otherwise required by applicable law.