Metates is 100% owned by Chesapeake and is located 175 kilometers northeast of Mazatlán in Durango state and is one of the largest, undeveloped disseminated gold and silver deposits in the world. A NI 43-101 report by M3 Engineering & Technology Corp. of Tucson, Arizona outlines a total resource of over 20 million ounces of gold, over 550 million ounces of silver. 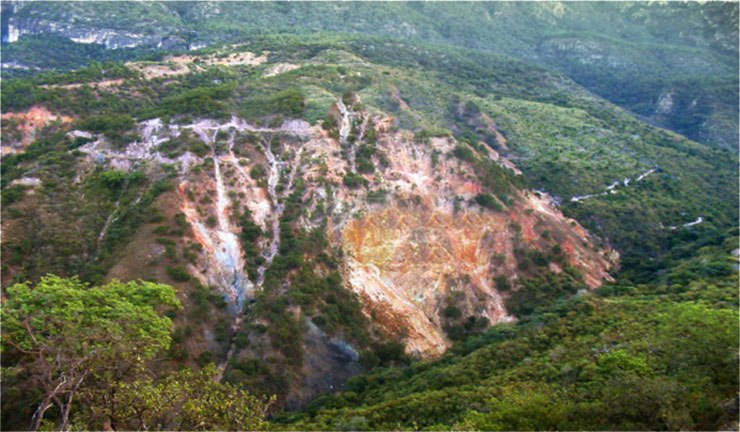 The mineral resource is broadly divided into intrusive hosted and sediment hosted mineralization. In terms of measured and indicated mineral resource tonnes, about 80% of the resources are sediment hosted and 20% intrusive hosted. The mineral resources are based on a block model developed by Independent Mining Consultants (“IMC”) during July 2014. The results of the recent metallurgical core drilling program reported in the news release since 2021, have not been included in this block model.

The measured, indicated, and inferred mineral resources reported are contained within a floating cone pit shell, and are compliant with the “reasonable prospects for economic extraction” requirements of National Instrument 43-101 Standards of Disclosure for Mineral Projects (“NI 43-101”). The mineral resource cone shell is based on a gold price of US$1,600 per ounce and silver at US$20 per ounce.

Summary of Past Studies

In 2013, M3 Engineering & Technology of Tucson, Arizona (“M3”) completed a pre-feasibility study (“PFS”) of Metates. The PFS envisioned a conventional truck and shovel open pit mining operation at a 120,000 tpd throughput. Crushed ore would be fed to a conventional SAG and ball mill circuit followed by a single stage flotation plant to produce a bulk sulphide concentrate. The concentrate is transported downhill to the processing site via a slurry pipeline where the sulfides are oxidized in an autoclave circuit prior to cyanidation to recover the gold and silver.

Zinc would be recovered from the pressure oxidation solutions via solvent extraction/electrowinning (SX/EW) methods to produce high grade zinc ingots. Over the 25 year mine life, zinc production will average 135 million pounds per year.

Strategically, Metates is unique in that a smaller mine can first be placed into production and scalable expansion can largely be funded by cash flow. In 2016, an updated PFS by M3 indicates an initial 30,000tpd throughput rate can internally fund a ramp up to a 90,000 tpd operation within 4-5 years. The initial capital cost is estimated at $1.91 billion including a $244 million contingency.

The Future: Developing Metates as a Low cost, Scalable Sulphide Heap Leach Mine

In January 2021, Chesapeake acquired Alderley Gold Corp., a private British Columbia mining technology company. With the acquisition of Alderley, Chesapeake gained access to a proven and innovative sulphide heap leaching technology together with certain asset rights and proprietary databases, creating the path towards a new growth oriented and innovative gold and silver producer. Chesapeake will now focus on progressing the Metates project towards production using the Technology in a heap leach operation.

Chesapeake has conducted preliminary testing on several samples from the Metates project. Metallurgical test results indicated the process will promote the oxidation of the sulphides to a level that will allow the subsequent leaching and recovery of gold and silver. With the Technology, the development of Metates as a heap leap operation will no longer envision autoclave circuits leading to significantly lower capital and processing costs, stronger overall project economics and a greatly reduced environmental footprint.

(All financial figures are in U.S. dollars unless otherwise noted)

Demand for gold & silver as a store of value continues to rise steadily with excessive growth in global money supply. However, precious metal mining has not kept pace and we are now mining lower grades ores today than at any time in history. World class deposit discovery rates are falling, existing oxide resources are being depleted, and a growing number of new mines use much higher-cost and technically challenging mining and processing methods.

Heap leaching, although in use for centuries as a means to economically extract valuable metals from ore, has now gained considerable popularity and large scale adoption in the mining industry in recent decades. It is most common as a processing method to extract gold, silver, copper, nickel and uranium.

At a high level, the process involves mining the ore, crushing (if necessary), placing ore on a lined pad, using appropriate chemical reagents to dissolve target metals, collecting leachate material and processing the solution to recover valuable metals, while recycling the barren solution back to the heap. 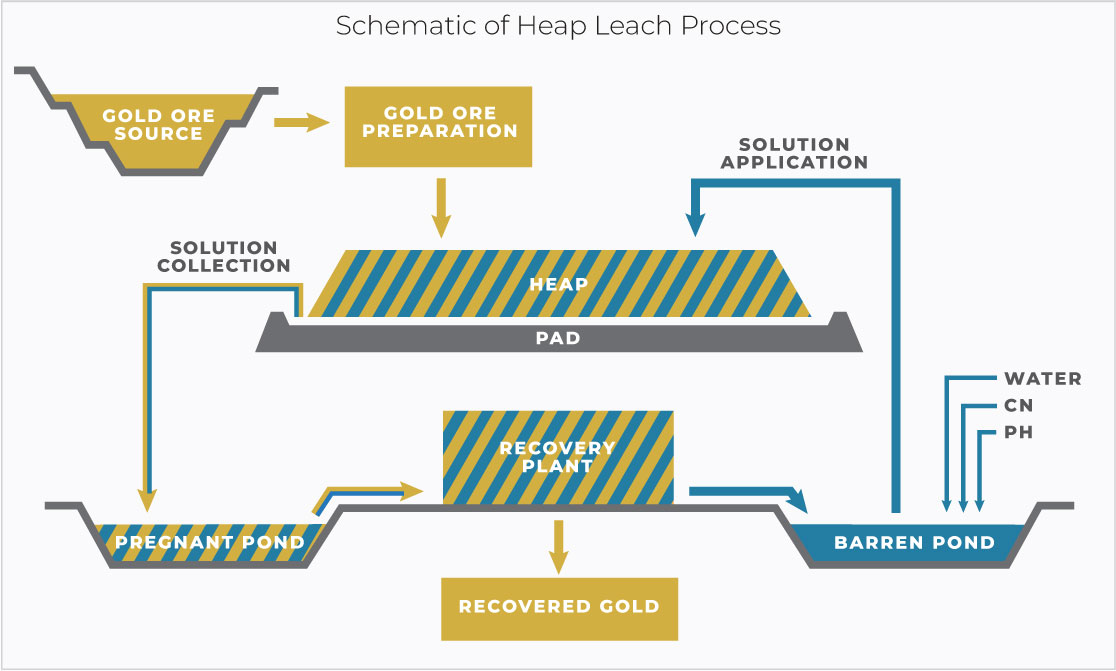 The Future: Recent Developments Allow For the Use of Heap Leaching Technology to Process Primary Sulfide Ores

The gold & silver mining industry is finally reaching a turning point. Surface oxide deposits are being rapidly depleted and miners are now forced to innovate and turn attention towards sulphide orebodies that were traditionally thought to be more expensive to process using existing technologies. The vast majority of total global ore types are sulfide in nature. The solutions however lay right under our noses as the copper industry, as one example, has been oxidizing and heap leaching sulphides for decades.

Borrowing from similar concepts, Chesapeake intends to be a leader in oxidizing and heap leaching sulphide precious metal ores, starting with application of the technology on Metates. 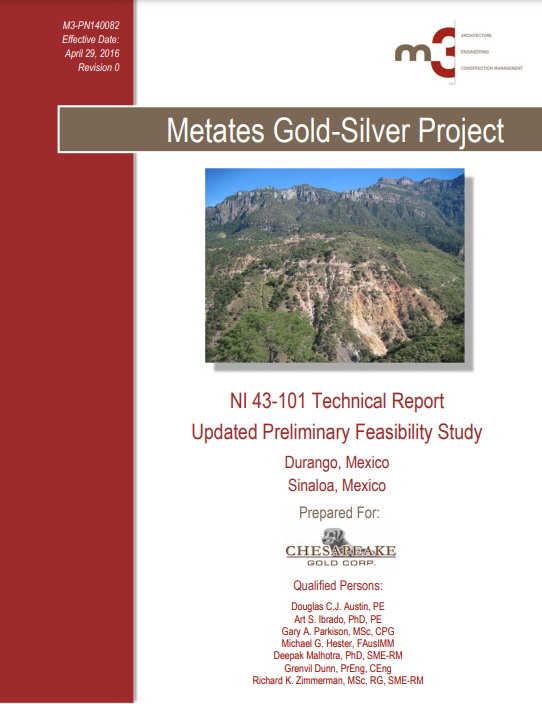 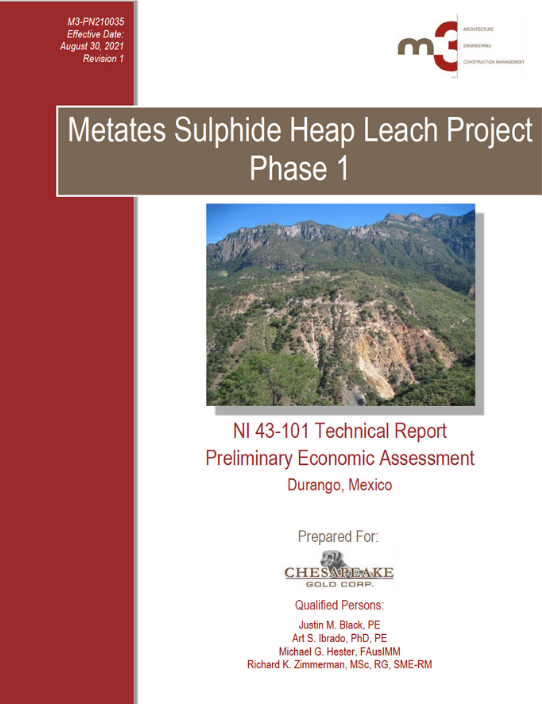